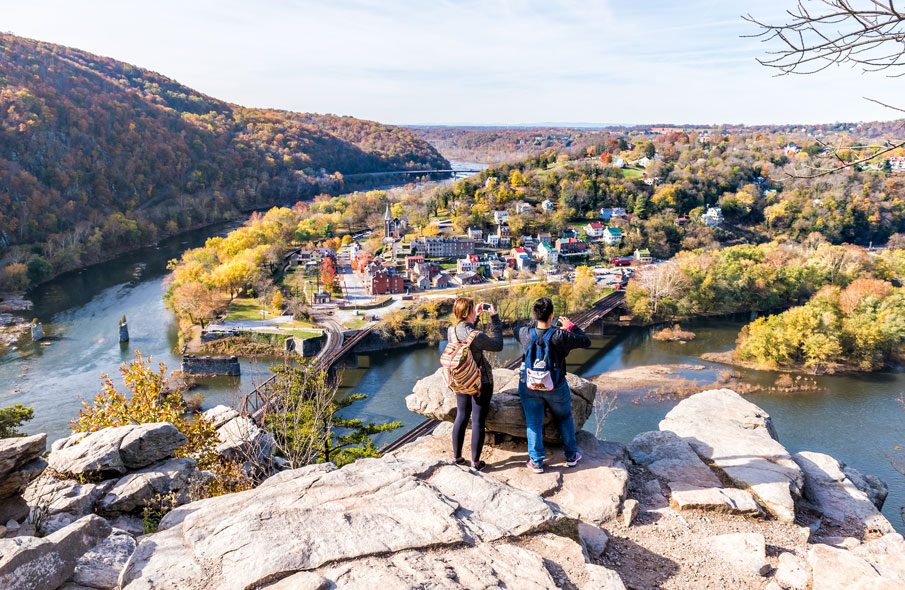 History is tucked into every corner of West Virginia. You may already know about the major events and landmarks, but there are also some hidden treasures that promise a world of discovery for all who visit them. The great news is, no matter your interests, you don’t have to travel far to experience a little piece of history for yourself.

Archaeologists estimate that the prehistoric Adena people moved more than 60,000 tons of earth to form the burial mound at Grave Creek, which towers nearly 70 feet above the ground. Dating back to as early as 150 B.C., this 2,000-year-old landmark tells an incredible story of how the Adena lived, worked, and mourned the passing of loved ones. The Grave Creek Mound Archaeological Complex is also home to the Delf Norona Museum, where visitors can learn about this culture through lectures and  artifacts found within the mound itself.

Built on 188 acres of beautiful West Virginia countryside, Pricketts Fort State Park boasts a faithful reconstruction of the original Pricketts Fort, which served as a place of refuge from Native American war parties during colonial times. Visitors can come observe reenactments of life in Colonial Virginia, with blacksmiths, artisans, and weavers all holding public demonstrations of what was necessary to support day-to-day life in the 18th century. Be sure to pack a picnic as well—there is a charge for admission to the fort, but access to picnic areas around the park is free.

The Great Railroad Strike of 1877 led to the death of an estimated 100 people. Unrest broke out throughout the country as railroad workers demanded higher wages and better working conditions. This movement started at the Baltimore and Ohio Railroad Martinsburg Shops, making it a significant landmark in the economic landscape of America. At the time of the strike, the railroads were the second largest employer in the country, and the strike that started in Martinsburg set a precedent for what organized labor groups can accomplish. Come visit this historic district to learn and experience what the life of a 19th century railroad worker was like.

The minster Alexander Campbell was one of the most significant figures in the Second Great Awakening of the United States. As a prominent leader of the Restoration Movement, he pushed for the unification of all denominations and congregations under one banner of Christianity. His home has been maintained as a museum under the ownership of Bethany College, which Campbell also founded. Visitors can come tour the facility, and learn about the life and standing religious legacy of Campbell, as well as the impact he left on the surrounding community of Bethany.

Devotees to the great Vedic teacher A.C. Bhaktivedanta Swami Prabhupada desired to build a home for their leader in Moundsville, West Virginia. It was meant to be a place of rest and study for the aging scholar as he continued his teachings. What started as a simple sketch on a scrap of paper eventually transformed into the magnificent facility that lives there today. Little is known about how this inexperienced group of followers built the opulent structure that visitors can tour today—full of mystery and a testament to what a dedicated group of people can accomplish when their goals are aligned.

From the years 1849 to 1851 the Wheeling Suspension Bridge was the world’s largest suspension bridge. At the time of its construction, it was an icon of modern engineering, and played a pivotal role in the success of the Union forces during the Civil War. The structure bears a stark contrast to modern bridges, and one can only imagine how awe-inspiring a trip across must have been when it first opened to the public. Modern enhancements have been put in place in an effort to keep the bridge operational and open to the public, but in late-2019 the bridge was closed due to safety concerns. The West Virginia Division of Highways is currently developing a plan for sustained rehabilitation and future use, so we’ll hopefully see the bridge open for travel soon.

As a means of remembrance of her own mother, Anna Jarvis founded Mother’s Day in Grafton, West Virginia to recognize “a mother’s private service to her family.” To commemorate her efforts, the International Mother’s Day Shrine was built outside of Andrews Methodist Episcopal Church in 1873, and to this day it remains open to the public. Visitors can come see where this internationally recognized holiday started, and truly feel the world’s passion for mother’s and the role they play in a child’s life.

In 1859 the abolitionist John Brown organized a militia of 18 men to raid the Harper’s Ferry Armory and free local slaves. Despite meager forces, he was surprisingly successful in his initial efforts, but was eventually forced to surrender, placed under arrest, and hanged. Today, much of the park is historically preserved to show what Harper’s Ferry looked and felt like at the time of John Brown’s raid, and gives a unique perspective of life in Civil War era America.

The story behind John Stewart’s Tavern may not be as mysterious or grandiose as other historic sites, but the community’s unwavering support for the landmark truly makes it a must-see destination. Built between 1790 and 1797, this hand-hewn building served as a rest stop and inn for pioneers and travelers in the 18th and 19th centuries. Traditional tools and furnishings remain on display, and the tavern interior is immaculately maintained, giving visitors a rare glimpse into what life on the trail was actually like.

West Virginia was granted statehood by President Abraham Lincoln in 1863. But years before it was ever made official, prominent figures gathered in the Wheeling Custom House for the West Virginia Constitutional Convention. They discussed foundational matters and policies that would eventually define the state and what it stood for. Today the building is called the West Virginia Independence Hall, and operates as a state-run museum for visitors to come and learn about the birth of our state.